[TIGER & BUNNY 2] OLFA has been selected as an ad placement company for “Origami Cyclone”!

PRESS RELEASE (to the press)

[TIGER & BUNNY 2]
OLFA has been selected as an ad placement company for “Origami Cyclone”! 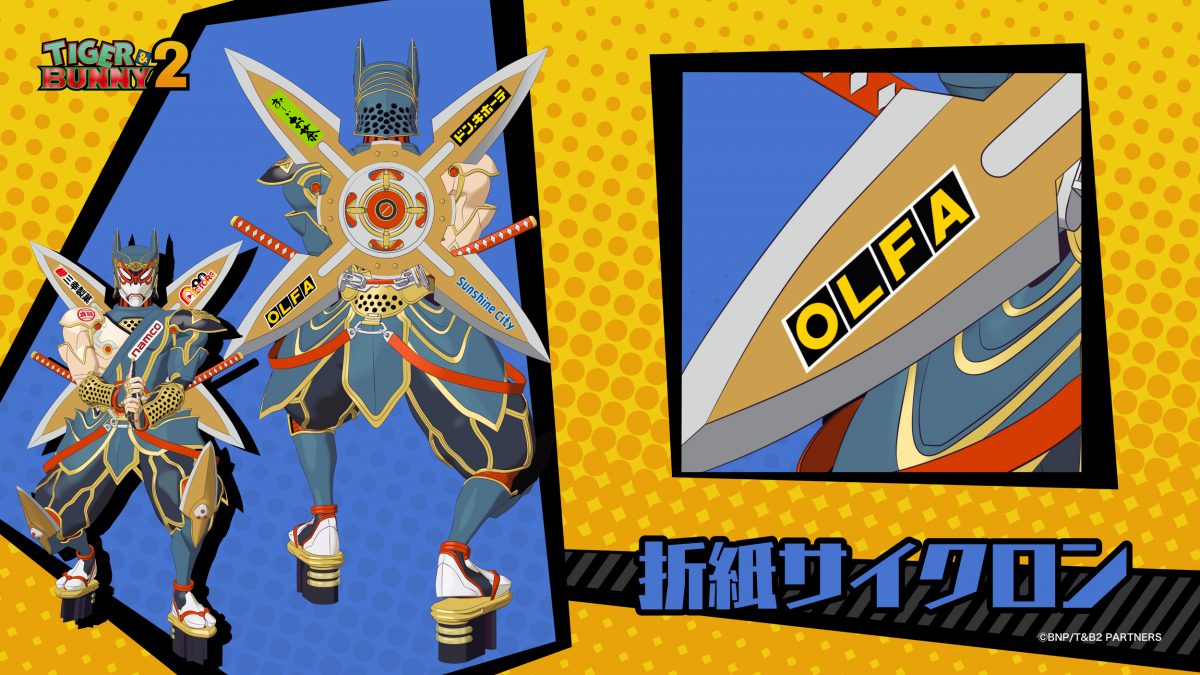 ■What is “TIGER & BUNNY 2”?
Sternbild is a city where various races, ethnic groups, and people with special abilities called
“NEXT” co-exist, and where “HEROES” maintain the peace by using these “NEXT” special abilities. These heroes wear the logos of their sponsors and fight crime and save lives to gain hero points and to increase their sponsor’s brand equity. Their activities are broadcasted on the popular TV program “Hero TV”, and they compete for the annual ranking to become the “King of Heroes”.

Today, Kotetsu T. Kaburagi and Barnaby Brooks Jr. continue their hero activities to keep the peace and improve the image of their sponsor company, Apollon Media. The “Hero System,” which originated in Sternbild, has now been introduced in various parts of the world, and the number of heroes is on the rise, with new heroes joining Sternbild as well.
Kotetsu and Barnaby are expected to play an active role as senior heroes, but what will be happening to them?!

■ Characters for Advertising Placement
OLFA’s character for the ad placement is Origami Cyclone. He is the ninja hero of Helperides Finance, the company to which he belongs in the story. He is a hero who is bent on appealing the sponsor’s logo by sneaking in on screen during the “HERO TV” broadcast. The OLFA logo will be placed on the lower left part of the shuriken knife he carries on his back. OLFA will do its best to support him, hoping that he will have much success and more impact than just videobombing.

■ About OLFA Corporation
Celebrating its 55th anniversary this year, OLFA is a pioneer in the manufacture and sale of cutting tools in Osaka. The rotary cutter, which can cut fabrics while rolling a disc blade, is an original product invented by OLFA in 1979.
Since its establishment, OLFA has been manufacturing high quality knives and hand tools with high functionality and safety in mind.

Everything you want to know about OLFA